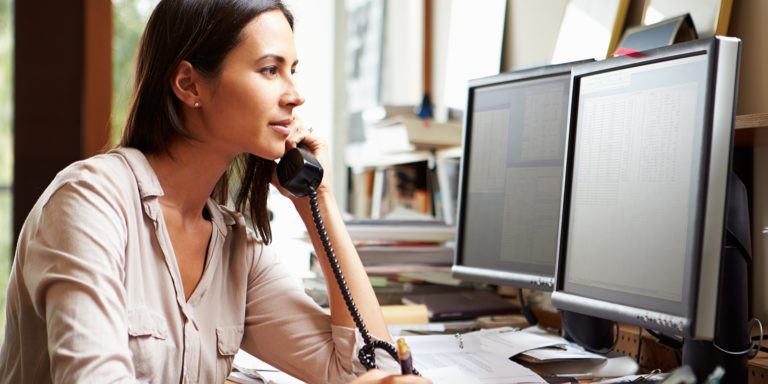 It takes a good amount of time and tenacity to properly conduct business-to-business (B2B) outbound sales prospecting. Today’s sales professionals, however, often come up short on both. They understand what it now takes to land a meeting (and subsequent sale), but they aren’t always doing it.

That was among the key findings in a research report released this fall that shows a majority of sales professionals are too quick to abandon (or even start) cold calling – and devote too few hours weekly to prospecting. This despite cold calling ranking second (behind client referrals) in prospecting effectiveness.

In some ways, the survey of 160 U.S. sales professionals in various sales roles and industries – conducted by sales training provider ValueSelling Associates, Inc., and Selling Power – isn’t a surprise. The means and manners in which sales reps work have changed; however, the needed interpersonal and time management skills have not.

According to survey results in that report, B2B Prospecting Challenges from the Front Lines:

Fear and frustration appear as prime culprits among those who give up too quickly – and at a time when success depends on more persistence. That same report shows it now takes, on average, more than five touches before an intended recipient responds.

So, what can we do to empower those on our sales teams who are time-challenged as well as less confident?

Allow More Time and Effort to Land That Initial Meeting
More and more, it’s harder to reach a prospective buyer to set up that initial meeting. And it likely won’t be in person. This is just reality, given the growing number of options we now have for outreach – phone, email, texts, social media, and face-to-face networking – which also create more “noise” for us to get through.

The most common difficulties cited by respondents include:

These barriers indicate more time needs to be spent researching a company and its industry to determine the people within the organization with both access and actual power to purchase.

Better Leverage Options for Gaining Introductions
Sixty-three percent of respondents believe conducting research to locate target prospects capable of making purchases was key. Another 61 percent believe knowing how to garner introductions by way of references is a highly valued skill.

Today’s sales professionals need to be adept at both gathering and giving information – and finding a balance between the two. Without establishing that credibility, cold-call-shy sales reps can devote too much time scouring LinkedIn, trade publications, and Websites in the name of research. Conversely, overly eager reps can launch into a call or email message without adequate preparation.

Sales leaders need to guide their teams to use their resources and available technologies efficiently, so they have time in their week to expertly participate in online forums, make the calls, send the emails, and attend the events to grab someone’s attention.

Don’t Give up Too Quickly
More than half of sales professionals (54 percent) say it now takes more than five touch points – such as phone calls, emails, and social media outreach – to book an initial meeting. In 10 percent of the cases, it took 11 or more touches.

Sales managers may need to assist their reps in creating a sales cadence to better manage sales efforts. Otherwise, these reps can quickly become overwhelmed and abandon essential tasks. Organization is a critical skill, including setting up calendars and blocking out adequate time for prospecting.

Build Confidence by Improving Competence
Of the 76 percent of companies that provide outside training, close to half (46 percent) do so only once a year. And, 28 percent admit their sales training happens only once – as part of initial onboarding.

Given this statistic, is it any wonder their sales reps don’t always feel up to meeting today’s prospecting challenges? Investing in repeated, incremental sales training – and for everyone on a sales team – does more than introduce or enhance existing skillsets. It reinvigorates sluggish team members whose renewed enthusiasm is contagious. It also signals the company believes in them and wants to provide them the tools to succeed.

Anxious sales reps who avoid the more difficult aspects of prospecting, particularly cold calling, may actually be apprehensive because, quite frankly, they don’t know what to do. They could be new to the field and inexperienced with roadblocks or rejection. Or they may be seasoned sales leaders privately struggling to master newer modes of communication.

Regardless, let’s all find a way to replace current prospecting fears with fierce determination. The formula is tried and true. By increasing the number of connections made, we can improve the revenue pipeline. And, bear in mind: With every call or connection these men and women make, they represent your organization. Make sure they reflect it well.

Julie Thomas is the president and CEO of ValueSelling Associates.

How to Achieve Predictable Revenue

How an SPM Platform Leads to Predictive Revenues

Featured Article
3 Strategies for Increasing Sales
Are You Too Dependent on Your Top Salesperson?
Digital Selling is Here to Stay