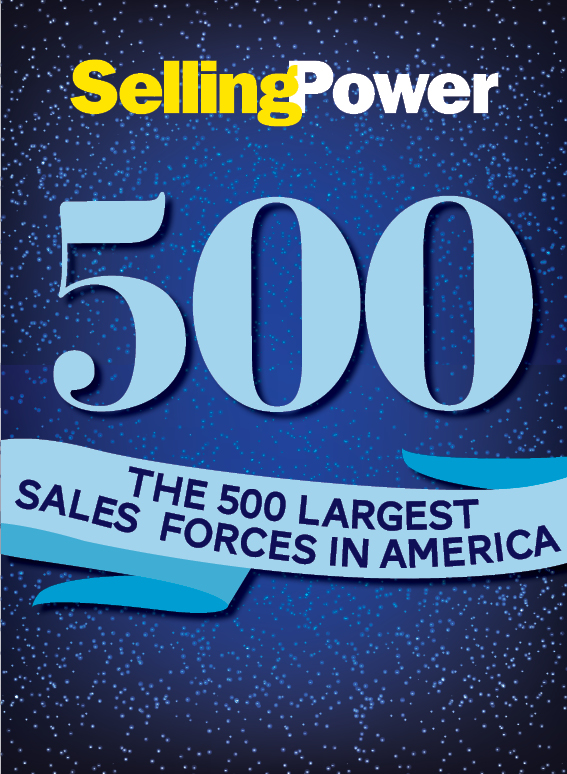 Every year, Selling Power magazine’s research team ranks companies according to the estimated number of salespeople they employ. The 500 top companies in America, which employ the world’s largest sales forces, depend on millions of salespeople to achieve their revenue goals, and this year marks the first time that the number of salespeople is approaching the 25 million mark. This shows that, without question, the men and women who make up each company’s sales force produce the revenue that will continue to fuel this country’s economy.

Every year, new companies make the list while others drop off. The total number of salespeople employed by all 500 companies listed is 24,831,572, which represents a small increase of about 1 percent – or slightly more than 300,000 additional salespeople – as compared to last year. This overall change is less than half the increase from last year and may signal some stagnation in the momentum of the economic recovery.

Our research team continued to find that salespeople employed by manufacturing firms contribute a far higher amount of sales revenue compared to other industry segments. The top 200 manufacturing firms employ 488,828 salespeople and produce over $3.8 trillion in sales. That’s an average of over $7.8 million in sales per salesperson. This represents no significant (+.83 percent) change in productivity compared to the previous year, which means productivity has been stagnant now for three consecutive years. The number of manufacturing salespeople remained relatively unchanged, gaining about 2,000 salespeople compared to last year. The total number of manufacturing industry employees increased slightly this year, increasing by less than 1 percent over last year.

The top 20 automotive megadealers reported positive numbers across the board this year. The top 20 firms own 1,689 dealerships (up by about 8 percent), employ an estimated 25,335 salespeople (an increase of about 7.9 percent), and produce more than $116 billion in sales (up by almost 10 percent). This brings the average annual sales per salesperson to $4.6 million (up by more than 1.7 percent). The productivity registered is a hopeful sign for an automotive industry that is continuing its recovery.

The top 50 insurance companies employ sales forces totaling 642,768 across the industry, with an average sales volume per salesperson of $1,130,266. This represents a significant increase in productivity of more than 10 percent. In fact, the number of salespeople remained about the same as the prior year, while their productivity increased by more than 10 percent. The total number of employees posted an increase of about 2.5 percent over 2014.

Overall, the numbers illustrate a recovering economy continuing to gain its footing, with generally positive results across all industries. Although the total number of salespeople employed by the top 500 remained relatively static, there were increases across the board in the number of employees, and the revenue generated per salesperson increased across every industry.

Each salesperson in the service or manufacturing industry supports, on average, 13.82 other jobs within the company; that figure marks a small increase from last year’s number of 13.75. These companies employ a total sales force of over 1.1 million salespeople, who produce more than $6.6 trillion in sales and ensure the employment of more than 16 million people. This underscores the fact that the sales forces of America are responsible for helping sustain and ensure our economy’s future growth.