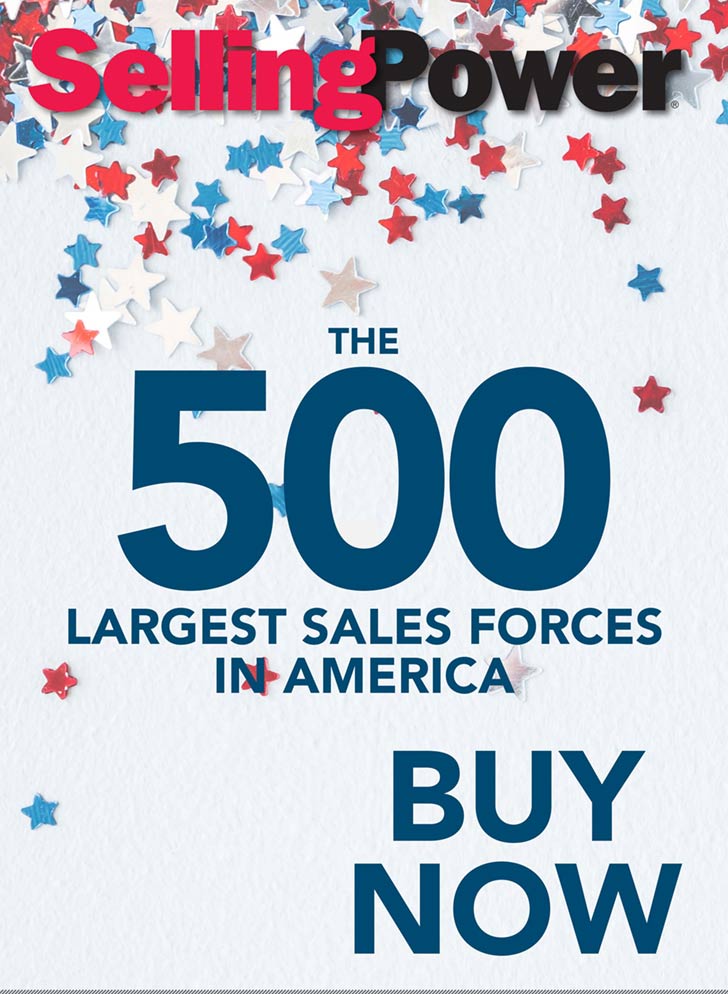 Much of this data was collected while pandemic lockdowns were in full swing, travel had all but ceased, and many companies had transitioned to having their sales teams work from home, when possible.

See the Top 10 Largest Sales Forces in each industry:

SALES PRODUCTIVITY DURING THE PANDEMIC

For the second consecutive year, our research team found that salespeople employed by service industry firms contributed a higher amount of sales revenue than those in manufacturing. The top 200 manufacturing firms employ 514,354 salespeople and produce just over $4.8 trillion in sales. That’s an average of $9.36 million in sales per salesperson. This represents a significant (7%) increase in sales productivity compared to the previous year and is a sign of having to do more with less during the pandemic. The number of manufacturing salespeople decreased by more than 45,000 salespeople since last year. The total number of manufacturing industry employees decreased by more than 80,000 when compared with last year.

The top 200 companies in the service sector reported a small decrease of just over 12,000 salespeople, bringing the total down to 559,375 salespeople. While that number has remained relatively static, the total revenue for the sector came in at almost $5.3 trillion – a surprising 2% increase since last year. This represents nearly $9.5 million in sales per salesperson and a moderate 4.33% increase in sales productivity – now showing seven straight years of sales productivity gains, ultimately overtaking sales productivity in the manufacturing sector. The number of service-sector employees posted a small increase of almost 4% this year, making it three consecutive years with employee growth.

The top 20 automotive megadealers reported mixed results this year. The top 20 firms own 1,806 dealerships, employ an estimated 27,090 salespeople, and produced almost $127 billion in sales (down by 5%). This brings the average annual sales per salesperson to almost $4.7 million (down by almost 14%). While the sales and productivity were off, the automotive industry still managed an increase (almost 10%) in the number of salespeople.

The top 50 insurance companies employ sales forces totaling 645,237 across the industry, with an average sales volume per salesperson of $2,261,766. This represents an increase in sales productivity of more than 7%. In fact, the number of salespeople increased slightly from last year (a 2.92% increase), while their productivity continued to increase ahead of the sales-force pace of growth. The total number of employees posted an increase of almost 5% over last year.

While the top 30 direct-selling companies reported more than 22 million salespeople, this year marked another significant swing in numbers, posting a sizable 6% decrease in the number of salespeople, with the pandemic contributing to the volatility in numbers we have reported on over the recent years.

It is interesting to note that some of the effects of the pandemic are not readily apparent in the overall Selling Power 500 numbers, particularly within the manufacturing and service industries. Most manufacturing companies, for example, were negatively impacted, at least to some extent, but the overall sector was bolstered, in part, by the medical and pharmaceutical companies, which played a key role in testing, life-saving equipment, and ultimately in therapeutics and vaccine development. Over in the service industry, travel sector companies were severely impacted by the pandemic while other companies in the big tech, retail, and delivery sectors fared much better. A few even flourished. Amazon, for example, added almost half a million jobs during 2020. It will be interesting to monitor the long-term effects of the pandemic on these various sectors in the coming years.

Each salesperson in the service or manufacturing industry supports, on average, 20.55 other jobs within their respective companies; that figure marks a slight increase from last year’s number of 19.09 and indicates the importance of the sales force during economic adversity. These companies employ a total sales force of more than one million, who produce over $10 trillion in sales and ensure the employment of over 23 million people. This underscores the fact that the sales forces of America will be responsible for helping our economy regain its footing as we continue to emerge from the pandemic.

TOP EXECUTIVES – Use the Selling Power 500 to benchmark your company’s productivity per salesperson. Find out how you measure up to your competition and the average in your industry. Check which companies have decreased their sales forces and which are gearing up for expansion. Buy the full Selling Power 500 list now.

EDUCATORS – Use the Selling Power 500 as a tool to build next year’s curriculum. Every year, Selling Power 500 companies seek to recruit more than 500,000 college graduates. There are more than a dozen colleges that offer sales curricula, and all of their graduates can look forward to solid careers in sales. Prepare your future students for a lucrative career in sales.

Creativity is the Secret Weapon to Engaging Prospects