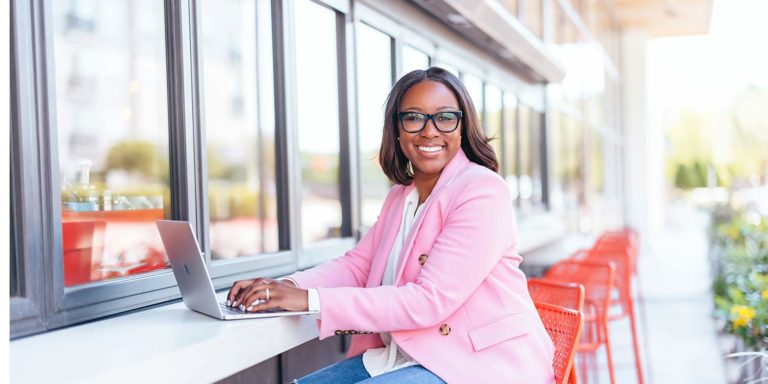 In the old days, when a baseball player came along who was so good, so young, sportswriters dubbed him “a natural.” Further research inevitably revealed that a huge amount of sweat and effort lay behind seemingly natural gifts. Still, the player must have had extraordinary natural gifts in the beginning – but they were gifts that had to be nurtured and developed with more hard work than most people imagine.

Something similar seems to be the case with Meka White Morris. Currently executive vice president and chief revenue officer of the Minnesota Twins, she rose rapidly through the ranks of professional sports sales and now stresses the hard work she had to put into her career to succeed. However, she acknowledges her background has helped a great deal as well.

“I have never looked at who I am as a hindrance,” Morris emphasizes. “I was a college athlete with a level of tenacity and grit and the can-do spirit that comes with athletics. The middle of six children, competing was a part of how I grew up.”

The daughter of Boston Celtics star, former Marine, and Olympic gold medalist Jo Jo White, Morris came from a very competitive but also very supportive family. She attended her father’s alma mater, the University of Kansas, on a track scholarship and learned all the hard lessons of sports.

But Morris also loves cooking. “In my childhood, with five girls and one boy, I spent a lot of time in the kitchen. Both my grandmothers were amazing cooks.” Today she says that passion for the kitchen yields some unique insights into putting together a winning sales team.

The competitive girl who grew up in Boston has sold successfully around the country for such marquee sports brands as the Cleveland Cavaliers, Charlotte Hornets, and Oakland Raiders. To acquire a well-rounded view of the sports and entertainment business, she also worked for Live Nation, Learfield, and Legends, to name a few.

But why exactly did this broadcast journalism graduate choose a sales career after initially trying out as a sideline sports reporter?

“Getting dressed up and putting on makeup every day was not going to work for me,” Morris remembers. The college athlete liked the attention that came from winning, but not the constant visibility that comes with a media career.

Also, media success depends largely on the subjective opinion of others. As for marketing, here too it can be difficult to judge the contributions of an individual marketer.

But sales is different in a way that appeals to Morris. She was ambitious and wanted to rise by her own efforts. “If I outsell you, I outsell you – no matter if I am a woman, or black, or old, or young, or whether I have been here long or not.” She liked the objective and “undeniable” metrics by which salespeople are judged.

Sales metrics simplified what was otherwise a complex world of male-dominated sports and white-dominated front offices. “I like simplicity,” Morris says. “I like to control the controllables.” And she could control how hard she worked and went after prospects.

Of course, that broadcasting degree probably helped as well, both in telling stories and in doing presentations. Morris argues that selling, especially but not just in sports and entertainment, is largely about telling effective stories to prospects – for example, getting consumers to see themselves at a Minnesota Twins game, with family or friends or colleagues. Or having a once-in-a-lifetime experience of being present when a pitcher throws the only no-hitter in his career.

For today’s sports, salespeople have to sell these visions and dreams, not just tickets. “If it’s just about selling tickets, you’ve already lost,” Morris says.

Admitting she may be biased, Morris believes selling is the single hardest job in any company. “To stand up in a room and have the gumption to look people in the eye and present something that, in some cases, they may not believe they need or even want – and do it with passion and vigor and belief in what you’re talking about – takes a hell of a person.”

And all of this constantly requires hard work. “Years ago, I was getting in front of mirrors practicing my pitch, so I knew it cold,” Morris remembers. “I was cold calling and knowing what to say when I got objections, keeping them on the phone engaged, and understanding their reasons for buying or not buying. That takes years of practice, and practice builds confidence.”

As in sports, unseen practice makes highly visible performance more perfect: “Winning is done when no one is looking,” Morris summarizes.

Into to Sales Management

She upped her own game when she moved into management. Morris served as the SVP of national sales for Learfield, which sells sponsorships and other offerings for college sports.

Then the rising sales star was named chief revenue officer of Tappit in March of 2020. Tappit got Morris into tech, with its Mobile Pay solution enabling touchless payments for entry and purchasing at sports events. The fast-growing company soon signed up the Kansas City Chiefs, Jacksonville Jaguars, San Diego Padres, and San Antonio Spurs. Tappit also entered the college market in a strategic partnership with Morris’s former company, Learfield.

Morris took another big step in August 2021 when she became CRO of the Twins.

These executive positions forced the gifted, gritty salesperson to think differently about how a winning sales team should be built and what her own role would be in running this team.

But she had a natural advantage on the first point. Remembering her childhood time spent in her mother’s large kitchen, Morris says she had always wanted to provide guests with something “comforting and warm.” If she wasn’t a salesperson, she might be a chef or restaurant owner.

She also learned that the individual cook matters at least as much as the recipe, because food tastes different from different cooks. And Morris argues there is a similarity in selling. Different people tell different stories – the heart of smart selling. So it’s critical to have diversity of thought from salespeople who come from different backgrounds. “They cook up something different; they have a fresh viewpoint about the consumer experiences and about story telling.”

And Morris believes that, “as goes the leader, so goes the team.” A sales exec needs to live diversity and inclusivity if that leader wants the sales team to mirror these values. “You can’t just do it on weekdays; your world should be filled with diversity of all kinds.” If leaders just go home to be with the people they are already comfortable with, they won’t get much real diversity at the office or on the job, Morris says.

And success in sales, like victories in sports and high achievements in any career, requires a willingness to get uncomfortable sometimes. “We’ve got to put pressure on ourselves and test ourselves,” says Morris, who has been putting herself in high-pressure, uncomfortable situations all her life.

The first distinction she had to address was that between being a sales manager and a sales leader. Morris says managing salespeople chiefly means working with sales processes and tangibles like reporting, forecasting, sales force structure, training, and systems. “But to lead people means dealing with intangibles: inspiration, vision, influence.”

Morris had no doubt about which role she wanted to play. “You can be a great manager and the company will still stay flat. But if you are a great leader, you will take the trajectory up.”

She says great leadership can “galvanize” a sales team – or, in sportier terms, “get all the oars rowing in the same direction.” And that’s the kind of executive leader Morris wanted to be. “Once I understood the difference between managing and leading, my career took off.”

Morris’s new team at the Twins sells to several sorts of buyers. First, the fans who buy tickets to the games – “our most important group, and they buy for various reasons.” Sports-buying behaviors have changed for fans as prices have risen over the decades and as new entertainment competitors (such as immersive experiences, e-sports, and streaming services) have emerged.

Another group of buyers is corporate sponsors. Here the important questions are, “What do you stand for in your market, and why does somebody want to be part of it?” Morris explains.

A sports team’s image is only partly under a salesperson’s control. “Sports is very public,” Morris explains. People have opinions about teams and individual players, good or bad, based on performance and sometimes other factors. People simply have much stronger visceral reactions to sports teams than they have toward other name brands.

But reps can control the story, and Morris still believes “people buy a story.”

Salespeople themselves must buy into the vision the Twins are selling. Morris has her reps pitch her and tell her the story they will tell. She plays a certain type of customer with a certain income, and prods her team members to explain to her why she should buy.

For example, “Paint a picture of me sitting in a seat with my family or co-workers, seeing something amazing transpire, or with some of my girlfriends, enjoying a glass of wine and having an experience that you can’t get anywhere else in the Twin Cities.”

Making the customer see that picture requires the salesperson to believe it in the first place. And when a salesperson believes in a story and the customer does too, “the decision is made,” Morris emphasizes. “Now, it’s just a question of price.”

Along with believers, Morris wants salespeople who think beyond their immediate tasks, about the business they are in and their own goals. “Everyone has something they do better than anyone else in the world, but 99% of us never find it.”

Meka White Morris found the best use for her natural talent and, through hard work and sticking with her vision, continues to use and develop it.

Diversity, equity, and inclusion in sales leads to better sales results, according to a Forrester Consulting report commissioned by LinkedIn.

Conducting an online survey of 500 U.S. B2B sales leaders in August and September 2021, Forrester reports 60% said diversity in their sales teams contributes to success. More than four-fifths predicted racial or ethnic diversity of sales teams will be equally or more important in the next two years.

Forrester also questioned the leaders about the internal and external resources devoted to diversity, equity, and inclusion; training; and company commitments to these goals. Based on responses to these questions, companies were classified as leading, scaling, or lagging. For example, nearly 90% of leading sales organizations say their sales teams are racially or ethnically diverse, compared with less than half of the laggards. And more than 90% of the leaders train managers in diversity, versus only a third of the laggards.

The researchers then looked at sales metrics for each of these diversity classes. Diversity leaders

Forrester recommends going beyond diverse hiring to expanding employee networks, developing inclusive leadership and listening programs, paying attention to language, and continuing to advance all these initiatives over the long term.