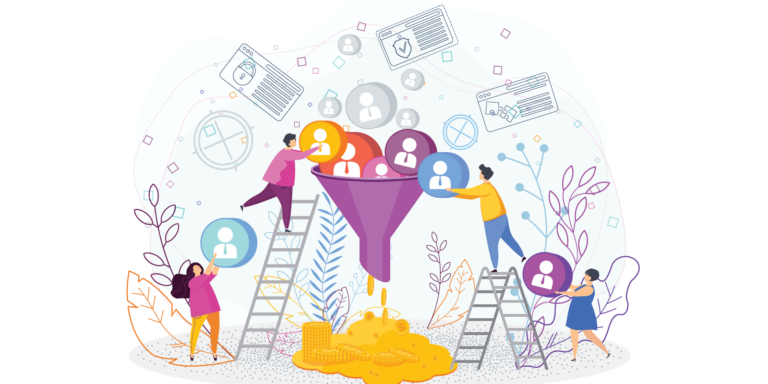 Aaron Ross’s book, Predictable Revenue, popularized and put math behind the idea of functional specialization in sales – instigating the era of the SDR (sales development representative).

In the decade since, sales development has gone from being a leading-edge foundation for the scalable sales machines – desired by growth-at-all-costs companies funded by venture capital – to a standard.

As of 2021, if you don’t supply your full-cycle account executives (AEs) with SDRs to prospect for them, you are at the deep end of the old-school pool. After all, why should you have AEs prospect for themselves when you can have someone less expensive do all the research, emailing, calling, and social outreach needed to set meetings?

Like all ways of seeking the benefits of functional specialization, though, the standard SDR model has some challenges. Here are a few:

But what is the alternative? It’s simple: Provide your AEs with everything they need to set their own meetings without wasting their time. Fortunately, they really need only three things:

For AEs to succeed, their critical threshold is around one net-new discovery meeting per week – requiring around six to 10 conversations. Using conversation-acceleration technology, like ConnectAndSell, reduces the time to reach that goal to less than 15 minutes per day. A list of targets plus message development takes another couple of hours, but it only has to be done once. Then results begin to appear immediately on the AE’s calendar.

As with any functional analysis, it’s key to break the job down into its components and then try to fit them back together to make a functional flow that can be resourced and managed to maximum advantage.

The alternative looks more complicated, doesn’t it? However, it has huge advantages over the standard “two generalists plus a handoff” sales-development model. One only needs to note that the role of the appointment setter can be filled as easily by an AE as by a specialist SDR for one reason: The market strategist, list manager, and call navigator work in concert as true functional specialists to completely eliminate the hours wasted trying to get a conversation.

That is, give an AE with the power to push a button and have a conversation with someone they really want to talk to (as determined by the company, in the form of the market strategist, represented as a validated contact by the list manager, and delivered effortlessly in real time by the call navigator), and they can be their own SDR! After all, the SDR’s ultimate job is to get meetings scheduled on their calendar – and who better to execute the conversation portion of doing that job?

With the addition of this new functional breakdown, we now have two additional ways of achieving the goal of having enough meetings for AEs:

1. Provide AEs with the means to efficiently be their own SDR by eliminating all list definition, contact management, and call navigation. Let them do their own talking – end to end. Here’s what this looks like for two months for 71 AEs who need one meeting per week:

2. Provide AEs with a smaller team of SDRs who focus on one thing – having conversations that convert to scheduled meetings. It’s even possible for these SDRs to be true professional appointment setters rather than the usual short-timers on their way to another job, allowing their skills to develop even further as they perfect their craft through hundreds of conversations. Here’s what this looks like for two months for eight “conversationalist” SDRs, each with a goal of 11.5 meetings per week:

So, it is possible that your best SDR might be your AE. Just take away the company strategy work, the data management work, and the call navigation work, and you are left with the need for conversational skill – which AEs have in abundance. As do great “conversationalist” SDRs. The choice is up to you.