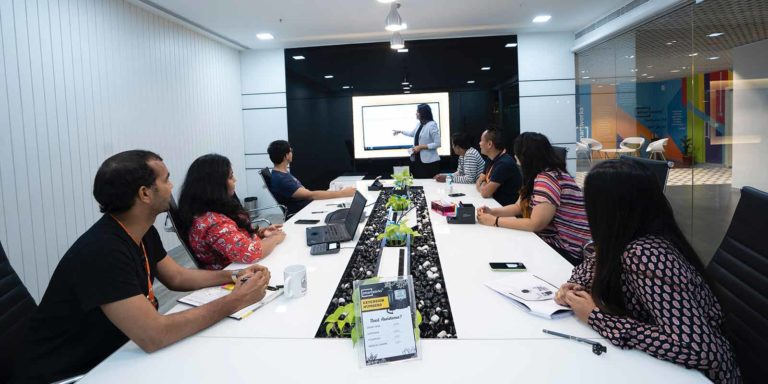 Nothing derails a sale faster than multiple decision makers; in fact, more than 85% of opportunities involve multiple decision makers (The Sales Board). Now, with more meetings happening in a virtual environment, it is even easier to add “just one more person” to the decision process. Despite this, organizations do a poor job preparing their salespeople to sell to decision-making teams.

This poor preparation causes a significant number of hits to the seller’s top and bottom line: 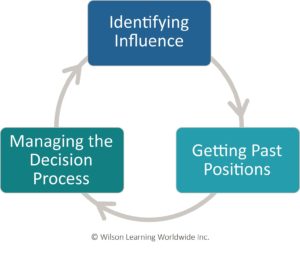 Many salespeople take the perspective that an individual’s title is all they need to know (the person with the biggest title wins) – but they are wrong. The Influence Map is determined by two critical elements: influence and disposition.

Influence can take many forms, including formal, informal, level of expertise, and credibility. If salespeople focus exclusively on formal influence, they will likely draw a poor Influence Map. 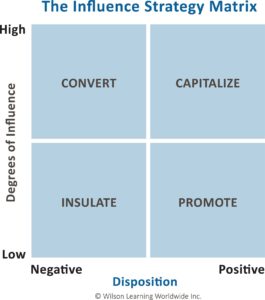 Perhaps the biggest challenge to reaching a decision with multiple decision makers is getting past the positions people take so we can get to the true need they are trying to meet. When one decision maker wants X and another wants anything but X, the decision-making process comes to a grinding halt – and no sale is possible.

For example, a salesperson we know was positioning a media marketing campaign to a customer. The VP of Sales and the Marketing Director were aligned in wanting an aggressive and expansive online and social media presence. However, the organization’s CFO said no because the cost was too high.

Realizing this created an impasse – and that no purchase would be made with these conflicting positions – the salesperson began exploring the reasons why each held their positions (what we call the interests behind the position).

The salesperson found that the CFO was concerned about ROI: the projections for the number of new customers from social media marketing were not high enough to justify the level of investment requested by the VP of Sales and the Marketing Director.

The interests behind the VP of Sales and Marketing Director’s position were also clear. They saw customers using social media to research vendors early in the buying process. The VP of Sales, for example, talked about a big deal they had lost because the customer had made a decision before even meeting with their organization. 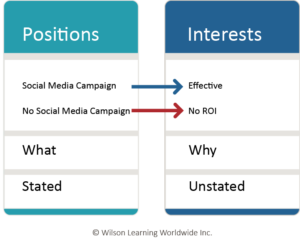 “Positions” are how people express what they want; “interests” (usually unstated) are why they want it. How do salespeople “understand interests” and uncover the interests behind the positions? By asking good questions.

By exploring the interests behind the positions, this salesperson was then able to offer a campaign that included a more targeted social media presence, based on researching the company’s target industries. He was able to show that this approach would retain the company’s projection of new customers while cutting the costs in half – making the ROI a net positive.

The salesperson is able to keep the decision-making process moving forward by exploring the reasons decision makers hold certain positions – the interests behind the positions.

Now that you have gathered information to draw your Influence Map and understand your buyer’s interests, you need to put this knowledge into action.

The key is using your knowledge of interests to develop actions to influence each decision maker based on where he or she falls on the Influence Map. There are four types of strategies: Convert, Capitalize, Promote, and Insulate.

To convert a person with high levels of influence but a negative disposition, you need to ensure they know how your solution meets their priority interests. Often, you can accomplish this by linking their interests to the interests of those high influencers who have a positive disposition to you, your company, or your solution.

Sometimes decision makers with a negative disposition have interests tied to a relationship with a competitor. Finding out the nature of these interests can help you address them, or you can insulate their interests from the key interests of high influencers to prevent them from slowing down the decision-making process.

You can also improve your position by promoting the interests (showing the business value) of those with a positive disposition but lower levels of influence. This elevates their influence, thus elevating your solution.

Salespeople who master these three skills not only succeed more in selling but are also seen as a business consultant – helping their buying team reach agreement on the most important interests to be addressed. The ability to guide the forward progress of the customer’s decision making provides additional business value to the customer – shortening the time to implementation and protecting the customer organization from opportunity costs of an unnecessarily drawn-out process.

Creativity is the Secret Weapon to Engaging Prospects