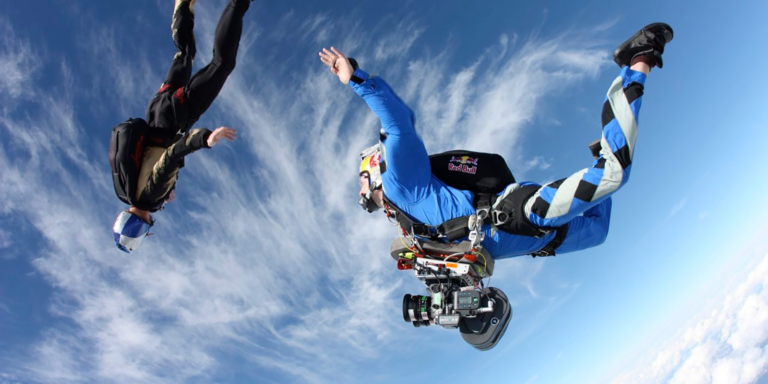 If you’ve ever seen the 2015 movie Point Break, you know Jon Devore.* You may not know the name but you’d never forget his role.

As the stunt double for lead character Johnny Utah, Devore led a team of wingsuit pilots in what has been called the most dangerous stunt ever filmed for a movie. It’s certainly one of the most memorable: four men in wingsuits flying in tight formation, weaving through a narrow fissure in the Alps, at speeds of more than 145 miles per hour. There was no CGI to enhance the scene. Everything was real: pure flying, pure adrenaline – pure Devore.

Devore’s job description is one that can make you pause and reconsider what’s possible in life. He is a professional skydiver, stunt coordinator, and aerial cinematographer. Over nearly two decades, Devore has completed more than 21,000 skydives and BASE jumps. He is a three-time national champion and two-time world champion, and has been the aerial coordinator and manager of the Red Bull Air Force stunt team for the past 17 years.

This is a man who lives not only at the cutting edge of human flight, but on the cutting edge of life. A man who ventures confidently into the world’s remote, rugged places to launch himself off mountains and out of helicopters – streaking through the sky at speeds faster than many small planes.

For just a glimpse of his skill, try to wrap your head around a competition called the Red Bull Aces, last held in 2016. In four-man elimination heats, wingsuit pilots launch simultaneously from about 7,500 feet and race head-to-head through slalom-style gates suspended under helicopters at various altitudes. “It’s a three-dimensional course that goes through thousands of feet of altitude. We have to go through exact points just like a skier would race through gates,” explains Devore. “You’re looking at five helicopters out in front of you with spinning blades ready to eat you up (in your mind). You know it’s not really going to happen but, visually, it’s just overwhelming.” The competitors are so fast, so precise, that winning can come down to hundredths of a second.

It’s flight like you’ve never seen before. “My passion is human flight, and I’d like to teach the general public that what we’re doing is actually flying, not just dropping,” Devore explains on his Website. He emphasizes that he and his colleagues are not just a bunch of “adrenaline-seeking fools with a death wish,” but artists whose canvas is the sky and the stunning terrain beneath it; professional athletes with skill akin to piloting any powered craft.

“Gravity is our engine. We manipulate the wind speed it creates off our bodies to fly forward and cover miles of territory – or to choreograph complex aerial routines at speeds of over 200 miles per hour.”

Most people only dream of flying like the birds; Devore has built a career out of it.

From Sea to Air
In a way, Devore has been preparing for this job all his life. He grew up in Alaska, right off the ocean. Sea lions lounged on the walkway between his house and the sea, and Devore would walk past them on his way to go scuba diving. There was a large eagle’s nest perched right outside his bedroom window and he’d often watch the eagles come and go – fascinated by and jealous of their ability to fly.

Before he turned 18, Devore had done more than most people do in a lifetime: river raft guiding, glacier exploration, alpine trekking. “As a kid, I just thought that was totally normal,” he says. “I’m a kid from Alaska – of course I do all this stuff.”

The one thing he couldn’t do in his hometown was skydive. Wanting to open a “choose your own adventure” company that included tandem skydiving, he moved to Texas, then to Eloy, AZ – home of the largest drop zone in the world at the time – to pursue his tandem rating. “Everybody who was anybody in the sport was there,” he says.

Within that community, Devore latched onto a small group of “artist-type skydivers” who were inventing a new style of skydiving called “free-flying.” He equates it to the advent of snowboarding in the ski world. Bored with the traditional approach of building formations in an arched, belly-down/limbs-up position, this group was experimenting with “flying three-dimensional and vertical and proving to the world that you could stay together and do this very hard, dynamic way of flying,” says Devore. “I joined onto that posse. At the time, there were six to eight of us in the entire world that were really trying to figure out this sport.”

For about the next 10 years, he competed on teams in national and world meets in this new form of skydiving. Eventually, he expanded into wingsuit flying and BASE jumping (BASE is an acronym for “building,” “antenna,” “span,” and “earth” – four categories of objects from which one can jump with a parachute).

In the late ’90s, two of his “posse” from Eloy started doing some work with a fairly young company called Red Bull and convinced Devore to join them in Tahoe. The company grew fast – as did demand for parachute jumpers in Red Bull events. When one of those jumpers went missing before a demo, Devore got the call to fill in. “That was the first real demo I did for Red Bull, and I met the right people and I was doing the right things…and all the cards fell into place,” he says.

When Red Bull decided to grow its aerial program, Devore was well placed to take a lead role – a position in which he has now served for nearly two decades.

Winning the Mental Game
You’d think that even a job like leading the Red Bull Air Force could start to become rote after more than 21,000 leaps into the void, but it hasn’t for Devore. He is still awed by the freedom of flying, by that first moment of stepping off a cliff or out of an aircraft, by the beauty and art of human flight. He still gets incredible joy from filming flight against a breathtaking backdrop like the Drakensberg mountain range in South Africa or the Courmayeur in Italy – places people may have seen in a travel magazine but never from a bird’s-eye perspective.

“That second you jump off the edge of a cliff, everything else in life turns off; and the coolest part for me is how everything slows down,” says Devore. “Whether it’s a small flower on the cliff edge, or you heard a funny little sound – or you name it – everything seems like a five-second window. But you go back and watch it on your GoPro video and it went by so fast you can’t even see it in a freeze frame; but, in your memory you could say exactly how many petals were on that flower that went by your face when you jumped off.

“That’s the most magical part to me: just how everything slows down, the hyper-focus, and there’s really no time for any other thoughts – whether you have work problems, life problems, or no problems. It all just turns off and all you can do is be very present at the moment. If you’re not, that’s probably where trouble finds you.”

And trouble does find people in this sport. In sales, a mistake might mean you lose a client. In wingsuit BASE jumping, a mistake could mean you lose your life. Devore has lost countless friends and acquaintances to the sport, and the awareness of that risk is something he struggles with constantly – even more so since he had children. With a wife and two kids at home, he finds he sometimes needs to tamp down thoughts of what “could” happen and rally the mental focus to take the leap.

Part of what enables him to turn that potential fear into energy is preparation. Consider, for instance, what went into the Point Break wingsuit scene. Devore first got his team together at the skydive center in Los Angeles and – in a safe, open skydive environment – spent a week rehearsing the situations they expected to face in the mountains. After 50 or 60 jumps in L.A., the team traveled to Switzerland a week ahead of production. There, without the pressure of cameras, they trained on-scene in Walenstadt – gradually bringing their formation in tighter and tighter. By the time the production crew arrived, the team was able to execute the flight with consistently expert precision. It takes that kind of preparation, says Devore, to do any high-risk stunt professionally and safely.

“I’m hyper-aware of the risks, and that’s why I put so much time and effort into coordinating everything,” he explains. “I’m never just ‘show up and go.’ My mantra is I cannot be afraid to say no – to hike back down off the mountain, ride the airplane back down, whatever it might be. It’s just a jump; it’s just a stunt sequence. Whatever it is, it’s a lot smaller than my life.” Devore says it’s important to have the courage – when a director asks him something like, ‘Can you go do that again but do it lower and closer?’ – to be able to say, “No. What you saw is what I’m going to do,” and not to back down from that conviction.

Despite the risks, Devore wouldn’t trade his career for any other. Every time he lands after a jump, he experiences a rush of achievement – a thrill in looking up, realizing what he just did, and knowing it was huge. “I’m lucky enough to have found a way to turn my passion into my profession,” he acknowledges. “I’m super happy with what I do, and it’s afforded me a great life – and I really want to show my kids that, if you have something you are super passionate about, don’t let people deter you. Follow your passion – because the people I see who do that are the happiest.”