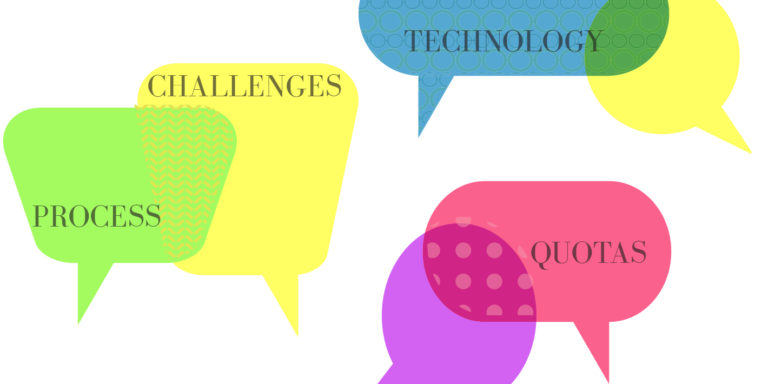 Ask 10 managers in the B2B sales space what sales enablement means and you’ll likely get 10 different definitions. While they’ll all probably overlap in some parts, they’ll also diverge in many others because sales enablement is what managers most want it to be at any given point in their sales cycle. In other words: Help me with this now, will you please?

Well, we’re out to make sales enablement work not only for and in any market but also to make clear what it can do for the professional sales field. It’s a tall order, but we’re well on the way to accomplishing that goal. Here are some particulars: In February of 2016 – at a local northern Virginia meet-up group of various practitioners all experiencing similar challenges – a vision to professionalize the rapidly emerging sales enablement profession began to emerge. Then, a congress of 100 people paid their own way to fly to Palm Beach, Florida (for a Friday afternoon meeting the week before Christmas) to act as delegates for their own lens of the sales enablement world.

The organization today doesn’t have a bank account – it’s supported 100 percent through the work of volunteers – yet, in eight months, it has

Today, I am delighted to formally announce the partnership between The Sales Enablement Society and Selling Power magazine to share the insights we are learning, the facts we’re collecting, and the stories of our members. Selling Power has been a mainstay in the sales world since 1982 and this is a testament to the ongoing vision of the publication that it’s the first organization to provide dedicated coverage of sales enablement. To help ensure the authenticity of the coverage, the Sales Enablement Society will provide both the editorial oversight and the content to Selling Power. This is the first issue of that partnership.

Here are some relevant facts to consider related to how important sales enablement has become.

Earlier this year, the movie chain AMC announced it would be spending $750 million revamping its theaters to offer high-end fast food to capture more of the night-out experience. The digital economy – revenue driven by selling intangible experiences or outcomes enabled by the convergence of various computing, mobile, and media technologies – is rapidly transforming old go-to-market models. Office furniture companies are providing space optimization strategies; the technology industry is being transformed by “the cloud”; and retail as we know it is being threatened by Amazon and other ways to buy products without going to a store.

Want more proof we are living in a post-product digital age? In July this year, the five most valuable companies in the world were Apple, Alphabet (Google), Microsoft, Amazon, and Facebook. Such companies are creating value seemingly out of thin air to the delight of customers and investors and to the horror of the businesses they are disrupting. Uber, established in just 2009, was created out of nothing and does not own a single car – but has fundamentally changed the taxi industry and is even impacting the auto industry as it considers allowing dealers to include fleets of Ubertype car services. And then there are driverless cars and trucks.

The tectonic forces of the digital age are not only disrupting businesses; they are fundamentally transforming the way buyers buy, how marketers message, how sellers sell, and how companies organize and measure their sales forces. If you’ve been around business a long time, you’ve seen big changes before, but nothing so profound, as big in scale, and that’s moved so quickly – and neither have the leaders inside companies. Organic growth in the overwhelming majority of large and midsized businesses is anemic, with less than 50 percent of salespeople hitting their quotas, and buyers are increasingly dissatisfied with the abilities of their sellers to help them solve problems.

Frustrated by these results, CEOs are asking their executive teams to help sales. Thus the explosion of content, technology tools, training programs, processes, and policies from across the organization (HR, marketing, finance, administration, and more). These well-intended investments are rarely coordinated, let alone integrated. Plus, such random acts of sales support create problems while trying to solve them.

In the mid-2000s, beginning in the technology industry, the title “sales enablement” began to emerge. Sales-and-marketing alignment was a hot topic then and the first wave of alignment happened as firms like Eloqua pioneered lead generation activities with systems to tie demand generation into CRM systems. Since then, we’ve seen an explosion of companies (and investment) to find other big wins.

So, depending on which lens of the sales productivity telescope you look through, scores of vendors are promoting ways to help the sales force. Around 2008, such industry analyst firms as IDC, Forrester, and Sirius Decisions began to cover these trends from different angles – both amplifying the noise and legitimizing it.

This laid the groundwork for different functional-level VPs to ask for a sales enablement role, too. Not having a lot of clarity of what the scope of the job would be, however, these roles tended to be catch-alls for problems not covered by different roles. For example, a CMO looking to respond to challengescboth from the sales force (about not being able to find what they needed) and business units (frustrated with their message not getting to sales) – are creating roles more focused on content management. VPs of sales are advocating roles to either help define sales processes, elevate sellers to sell to executives, or even just to help stop the clamor coming from the sales support supply chain behind them.

Where does that leave us in 2017? Referring back to the beginning of this article, we have an explosion of jobs with the title “sales enablement” in them peppered across many different industries: technology, financial services, media, manufacturing, life sciences. However, any analysis of open job requisitions will reveal a complete lack of order or pattern to the scope of these roles. Some are viewed highly tactically, others incredibly strategically.

Some are focused on “fixing” specific things about salespeople while others are focused on simplifying the entire system to accelerate growth. Said differently: Today, a sales enablement role is like a snowflake – it’s different in each company.

Scott Santucci is the founder of the Sales Enablement Society and director of The Alexander Group. For more information, go to www.sesociety.org.

How to Prevent Your Top Sales Reps from Leaving