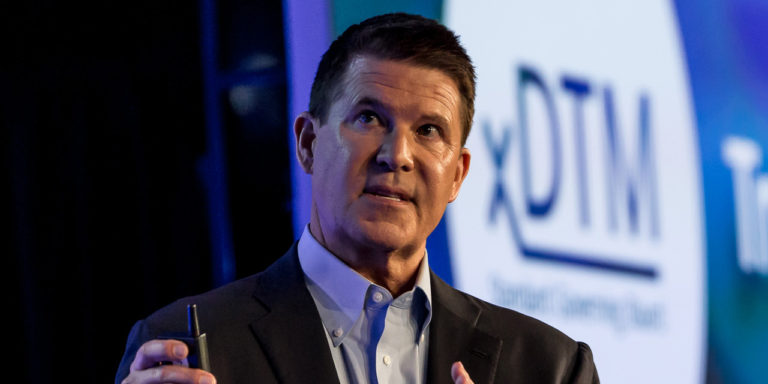 It’s the American dream personified. And, if you ask Keith Krach, it’s far from dead. At age 12, Krach began working summers in his dad’s machine shop. He never looked back.

Those who didn’t know him previously may have seen Krach pop into the spotlight in January 2017, when DocuSign announced it had found his replacement as CEO. Krach had announced in October 2015 that he would step down as CEO and move into the role of chairman as soon as the company could find a replacement. Under his stewardship, Krach led DocuSign through 60 times growth by building the DocuSign Global Trust Network, which includes 250,000 companies – strategic partnerships with many of the world’s most powerful technology companies.

By the time he handed off the company to successor Dan Springer, more than 100 million people had signed up for the company’s digital transaction software – and it was adding another 100,000 new registrations daily.

These kinds of numbers are pure Krach, who has a long history of remarkable technology leadership. One might call it a pattern of successful accomplishments. Here’s a list.

Growing Up
Like many business superstars, Krach had humble beginnings that shaped his values and his genuine, people-oriented personality. He grew up in Rocky River, OH, a small Midwestern town. Along with his two sisters and a mother who taught school, there was Keith and his father who owned a machine shop that employed five people (during good times) and two people – father and son – during tough times.

It was his parents’ values, not their circumstances, that shaped Krach. His mother was “about the most enthusiastic person in the world,” says Krach. “What I learned from her is, you know, people can deny your logic but they can’t deny your enthusiasm.” She was also a tough woman. She coached the boy’s ninth-grade wrestling team. And she didn’t blink when Krach’s father lost his job; she assured him that the whole family was behind him and she would go back to work; then, she rallied everyone to pitch in.

Krach’s father was “the best leader I’ve ever known in my life. He certainly modeled one heck of a work ethic,” says Krach. After losing his job, the senior Krach started his own machine shop, Litco Industries, at the age of 40. Krach began working in the shop at age 12. The first summer, Krach took out scrap metals. In the second summer he learned how to weld. The third summer, paint. By the time he was 15, he could work all the machines.

But it wasn’t just work ethic Krach learned from his dad. Krach remembers one day when he was about 15 years old. The two of them were driving to the machine shop and Krach said, “Everyone just loves you, dad. Why? What’s your secret?”

The elder Krach pulled into a parking lot, stopped the car, turned to his son and said, “When you’re with the Pope, you pray. When you’re with a drunkard, you drink. Everything between goes, but always be yourself. Any questions?” Krach says he has always carried that lesson with him: Respect others and make them comfortable around you but maintain your integrity.

While family played the most significant role in shaping his character, one of Krach’s most crucial life lessons came on the basketball court sometime around seventh grade. A solid player, Krach scored about four points every game – but teammate Frank Wilson was consistently scoring in the 20s and Krach couldn’t figure out how he was doing it. One day, the coach sat the team down to watch a game film and Krach decided he was just going to watch Frank Wilson to see what made him so good.

“What I learned was that what he was great at – better than anybody – was moving when he didn’t have the ball. And that stuck in my mind – you know, what you do when nobody’s looking,” Krach says. “And I think that applies to life, to business. To me, the definition of luck is preparation meets opportunity. So, even if you’re giving a 15-minute talk, sometimes you prepare four hours for it. Prepare for meetings, follow-up – all that stuff when nobody’s looking. Frank Wilson was that kind of lucky – he was all about the preparation and that created opportunity for himself.”

The Road to DocuSign
Armed with a strong work ethic, solid personal values and a genuine, magnetic personality, Krach went off to Purdue University with the goal of becoming an engineer, then returning home to work alongside his father at Litco. The older Krach envisioned doubling the company’s size – from five people to 10 – with his son’s help. But, in Krach’s sophomore year, he won one of two General Motors scholarships awarded to Purdue engineering students. The scholarship paid for tuition, books, a living stipend – and included a great job in Detroit. Krach headed for the Motor City after graduation, stepping onto a professional trajectory that went straight up.

It was at GM that Krach learned his real passion was leadership. He attended Harvard Business School’s MBA program with GM’s support, then spent 10 years with the automaker, becoming its youngest-ever VP at age 26. To those inside and outside the company, it looked like Krach was headed straight for the top. But, when Krach turned 30, he decided he wanted to experience a more entrepreneurial environment and left GM to become the number-two person at now-defunct ChronoSoftware.

ChronoSoftware doesn’t show up in many Krach profiles or employment history lists. That’s because it was, as Krach will tell you, the worst year of his life – a blip on an otherwise untarnished career. “The CEO and I had a different set of values,” he remembers. Those differences were made apparent on Krach’s first day when she told him there was a board meeting the next day and Krach needed to say X, Y, and Z because IBM – which had invested tens of millions of dollars in the company – would be present at the meeting. Krach refused, arguing that what the CEO was asking him to say was a lie. He remembers thinking he had made the biggest mistake of his life in leaving GM. “The things I took for granted at General Motors – in terms of a great set of values, how they treat their people, all that training – I kind of missed it when I moved out,” he admits.

He spent a year at ChronoSoftware, all the while torn between two fundamental values: (1) he had never quit anything in his life, but (2) he wasn’t living out his values every day. His values and integrity finally won out on the day Krach’s oldest son was born. The CEO called and demanded Krach leave the hospital to come meet the IBM team at the office. He refused; she became insistent; he quit.

“It was a horrible experience,” he says. “But I probably learned more in that year than any other year in my professional career.”

Failure and bad decisions are usually the best teachers – and the perennially positive Krach used the lessons learned at ChronoSoftware to propel him to astronomical successes with Rasna, Ariba, and DocuSign – the three companies with textbook-perfect growth typically associated with Krach.

Krach is also frequently associated with the term “category creation.” After leaving ChronoSoftware, he joined the founding team of Rasna, which created a new methodology for optimizing mechanical designs and launched the mechanical design synthesis category. Just before it was slated to go public, Rasna was sold in 1995 to Parametric Technology for $500 million. A year later, Krach grabbed some of his old Rasna colleagues and created the B2B electronic commerce category with the founding of Ariba – where Krach served as chairman and CEO. At the time, as Forbes pointed out in its 2000 “Top Tech Execs” profile, “Business-to-consumer selling was the order of the day, but Krach was one of a handful of tech executives who foretold the explosion in B2B electronic marketplaces.”

Krach has an uncanny ability to look through current trends, see beyond them into the future, and leverage that vision to transform the way the world works. As the 2000 Forbes piece observed, “Ariba is one of those companies that comes along and creates a sea change in the way businesses and individuals organize themselves or conduct business. Keith Krach…is the guy rowing the boat.” No surprise, then, that Ariba was cash-flow positive from its second quarter of its existence and grew its revenues 100 percent quarter over quarter for 12 quarters in a row. In 2012, SAP acquired Ariba for $4.3 billion and, today, a trillion dollars of commerce goes through the Ariba network – more than Amazon, Ebay, and Alibaba combined.

At DocuSign, Krach built the digital transaction management category, which allows anyone to securely transact anything, anywhere, on any device. In his six years as CEO, Krach drove DocuSign’s global expansion from 75 employees to more than 2,000 employees, including four acquisitions. The company has become a verb, like Google or Xerox – as in: “Can you DocuSign that form?” Along the way, it has transformed the way business works, exponentially reducing paper usage and speeding transactions.

In a 2013 interview for Fortune’s “10 Questions” series, Krach was asked what he sees as his greatest accomplishment. At one time, he thought it would be his work as a founder and CEO of Ariba. But, in 2013 – two years into his role as CEO of DocuSign – he decided his greatest achievement lay ahead of him. “There is no doubt in my mind that, by the end of the decade, every successful company will be fully digital,” he told Fortune. “DocuSign is at the heart of that digital transformation, and we have the opportunity to truly impact the way business is done across organizations of every size and industry, everywhere in the world. The potential is literally infinite.”

More Heights to Reach
Looking back on four decades in business, you wouldn’t think Krach could fly any higher – especially now that he has sidestepped into the DocuSign chairman’s role and, over the past four years, stepped away from serving as chairman of the board for Angie’s List and the Purdue Board of Trustees. But remember: This is a guy who climbed Mount Kilimanjaro and did survival training in the Amazon with his son just for fun. Also a guy who went great white shark cage-diving off the coast of South Africa.

He not only knows he can fly higher – he knows he will: Krach recently signed up to go into space with Virgin Galactic. He has made his down payment and is now waiting enthusiastically for the call to go up once the technology is fully developed. He wants to take his eldest son – a rocket scientist with NASA who works on Rasna software. “Yeah,” he says, his eyes alight. “That would be fun.”

Keith Krach had the good fortune to be mentored by John Chambers of Cisco Systems. Chambers initiated the invitation, telling Krach he could ask him anything he wanted – “You know, the things that you can’t ask the board, the executive staff; maybe your wife doesn’t understand” – and Krach did. “I asked him everything under the sun and he was just a great mentor,” says Krach.

They met once a month for four or five years. One day, Krach wondered aloud why Chambers was doing this for him. Chambers said it was because somebody did it for him. And he didn’t want anything in return other than for Krach to pay it forward and give back. “Keith,” Chambers told him, “that is the magic of Silicon Valley.”

Krach has been paying it forward ever since. It’s another pattern of success.