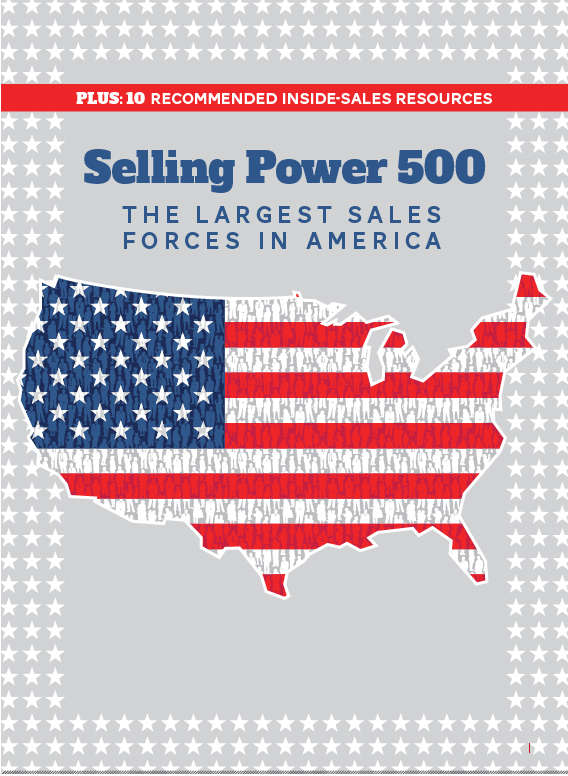 Every year, Selling Power magazine’s research team ranks companies according to the estimated number of salespeople they employ. The 500 top companies in America, which employ the world’s largest sales forces, depend on millions of salespeople to achieve their revenue goals, and this year marks the first time that the number of salespeople has topped the 24 million mark. This shows that, without question, the men and women who make up each company’s sales force produce the revenue that will continue to fuel this country’s economy.

Every year, new companies make the list while others drop off. The total number of salespeople employed by all 500 companies is 24,524,522, which represents a small increase of about 3 percent – or slightly more than 700,000 additional salespeople – compared to last year. This overall change, although small, is almost double the increase from last year and may signal some forward momentum in the economy as a whole.

Our research team continued to find that salespeople employed by manufacturing firms contribute a far higher amount of sales revenue compared to other industry segments. The top 200 manufacturing firms employ 486,750 salespeople and produce almost $3.8 trillion in sales. That’s an average of almost $7.8 million in sales per salesperson. This actually represents no significant (-.97 percent) change in productivity compared to the previous year, which means productivity has been stagnant now for two consecutive years. The number of manufacturing salespeople remained relatively unchanged, gaining about 4,300 salespeople compared to last year. The total number of manufacturing industry employees actually dropped slightly this year, decreasing by less than 1 percent from last year.

The top 200 companies in the service sector reported a very small decrease of less than 10,000 salespeople, bringing the total to 600,164 salespeople. The number of salespeople decreased by almost 1.5 percent, and the total revenue came in at just a bit less than $2.5 trillion, which is almost a 5 percent decrease from last year. This represents more than $4.1 million in sales per salesperson and a 3.4 percent decrease in productivity, ending the last two years’ productivity gains. The number of service-sector employees increased by less than 1 percent this year, making two consecutive years of increase in the number of service-sector employees. This year, the total number of employees in the service industry increased by more than 25,000 people.

The top 20 automotive megadealers reported positive numbers across the board this year. The top 20 firms own 1,565 dealerships (up by about 13 percent), employ 23,475 salespeople (an increase of about 13.4 percent), and produce more than $106 billion in sales (up by a sizable 14.8 percent). This brings the average annual sales per salesperson to $4.5 million (up by more than 1.2 percent). The productivity registered is a hopeful sign for an automotive industry that continues to struggle.

The top 50 insurance companies employ sales forces totaling 638,090 across the industry, with an average sales volume per salesperson of $1,019,585. This represents a significant decrease in productivity of more than 14 percent. In fact, the number of salespeople decreased by about 6 percent while their productivity decreased by more than 14 percent. The total number of employees posted an increase of about 3 percent over 2013.

Overall, the numbers continue to show the struggles of a recovering economy, with mixed results across all industries. Although the total number of people employed by the top 500 companies increased, there was a decline in the number of employees in the non-direct-selling sales force, and the revenue generated per salesperson dropped in all but the automotive industry.

Each salesperson in the service or manufacturing industry supports, on average, 13.75 other jobs within the company; that figure marks a small increase from last year’s number of 13.7. These companies employ a total sales force of almost 1.1 million salespeople, who produce more than $6.2 trillion in sales and ensure the employment of more than 16 million people. This underscores the fact that the sales forces of America are responsible for helping to sustain and ensure our economy’s future growth.

TOP EXECUTIVES – Use the Selling Power 500 to benchmark your company’s productivity per salesperson. Find out how you measure up to your competition and the average in your industry. Check which companies have decreased their sales forces and which are gearing up for expansion.

SALESPEOPLE – Use the Selling Power 500 as your best-prospect list. There is no other source that gives you access to those companies that purchase products for a large number of salespeople. This is your ideal list if you sell sales training, sales incentive services, customer relationship management solutions, automotive fleets, sales meetings, or trade show services. Begin your account planning by researching company Websites.

JOB SEEKERS – Use the Selling Power 500 to plan your sales career. These 500 companies employ the largest sales forces in America. Large companies invest heavily in recruiting, training, and rewarding sales staff. To find job openings, log on to the companies’ Websites.

EDUCATORS – Use the Selling Power 500 as a tool to build next year’s curriculum. Every year, Selling Power 500 companies seek to recruit more than 500,000 college graduates. There are more than a dozen colleges that offer sales curricula, and all of their graduates can look forward to solid careers in sales. Prepare your future students for a lucrative career in sales. (Note: media research shows that the average Selling Power magazine reader has a college degree, works in sales management, and has a household income of more than $174,000 per year.)

Special thanks goes to our corporate research team for collecting the data. To have your company listed in the Selling Power 500 next year, please write to Selling Power 500 Research, PO Box 5467, Fredericksburg, VA 22403.