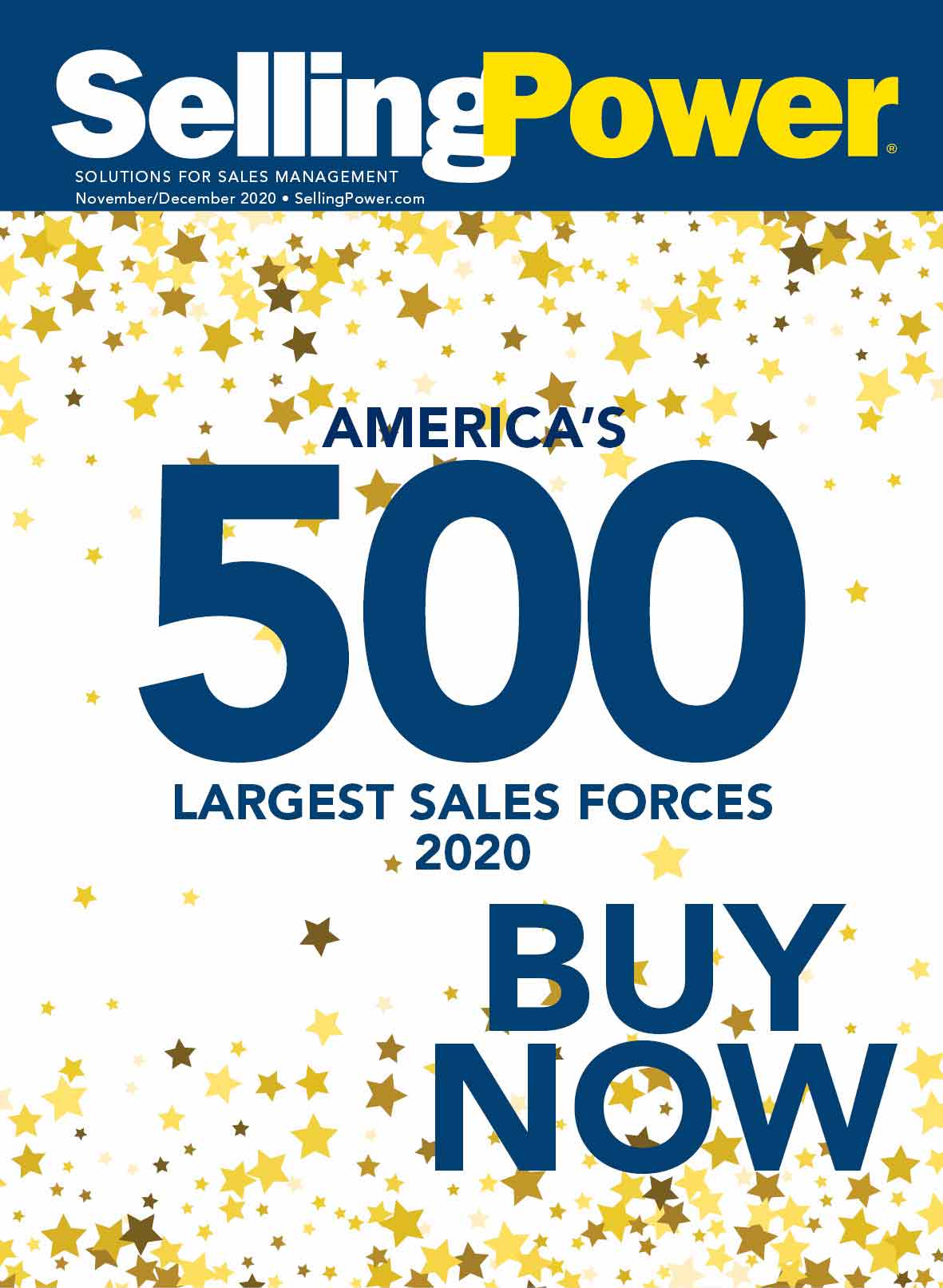 Every year, Selling Power magazine’s research team ranks companies according to the estimated number of salespeople they employ. The 500 top companies in America, which employ the world’s largest sales forces, depend on millions of salespeople to achieve their revenue goals, and the number of salespeople this year totals more than 25 million. This shows that, without question, the women and men who make up each company’s sales force produce the revenue that will continue to fuel this country’s economy. It should be noted that this is our final listing featuring pre-pandemic reporting, and it will be interesting to compare next year’s data once we have analyzed the pandemic’s impact.

A NEW CHAMPION IN PRODUCTIVITY

For the first time since we began the Selling Power 500, our research team found that salespeople employed by service industry firms contributed a higher amount of sales revenue than those in manufacturing. The top 200 manufacturing firms employ 560,157 salespeople and produce almost $4.9 trillion in sales. That’s an average of $8.7 million in sales per salesperson. This represents a significant (14 percent) decrease in productivity compared to the previous year and is the first major decline in four years. The number of manufacturing salespeople increased by more than 78,000 salespeople since last year. The total number of manufacturing industry employees remained relatively unchanged when compared with last year.

The top 200 companies in the service sector reported an insignificant decrease of just under 3,000 salespeople, bringing the total down to 571,878 salespeople. While the number of salespeople remained relatively static, the total revenue came in at almost $5.2 trillion – a 2 percent increase since last year. This represents nearly $9.1 million in sales per salesperson and a moderate 2.6 percent increase in productivity – now showing six straight years of productivity gains, ultimately overtaking productivity in the manufacturing sector. The number of service-sector employees remained relatively unchanged, posting an anemic increase of less than 2 percent this year, making it two consecutive years with little growth.

The top 20 automotive megadealers reported generally positive numbers this year. The top 20 firms own 1,649 dealerships, employ an estimated 24,735 salespeople, and produce over $134 billion in sales (up by almost 5 percent). This brings the average annual sales per salesperson to over $5.4 million (up by almost 14 percent). The productivity registered indicates a positive year for the automotive industry.

The top 50 insurance companies employ sales forces totaling 626,917 across the industry, with an average sales volume per salesperson of $2,105,212. This represents a hefty increase in productivity of more than 27 percent. In fact, the number of salespeople increased slightly from last year (a 2.4 percent increase), while their productivity continued to increase ahead of the sales-force pace of growth. The total number of employees posted a decrease of 7.3 percent from 2019.

The top 30 direct-selling companies reported more than 24 million salespeople, but this year marked another significant swing in numbers, posting a sizable 12 percent increase in the number of salespeople, which continued a trend in volatile shifts in reporting over the past 19 years.

It is interesting to note that, while the service sector was the only sector with significant increases in the number of employees, the manufacturing sector was the only sector (aside from direct selling) that reported significant increases in the overall number of salespeople. Productivity per salesperson was volatile, with the manufacturing industry posting a significant 14.5 percent decrease, while the insurance and automotive industries posted significant increases of 27 percent and 14 percent, respectively. The service industry remained relatively unchanged with a 2.5 percent increase in productivity per salesperson. Overall, our 2020 listing (based on 2019 data) saw the service industry overtaking manufacturing in terms of productivity, and the baseline is now set for next year when we look at the data from the pandemic year of 2020.

Each salesperson in the service or manufacturing industry supports, on average, 19.09 other jobs within the company; that figure marks a slight decrease from last year’s number of 20.36 and breaks a trend of increases over the past few years. These companies employ a total sales force of more than one million salespeople, who produce over $10 trillion in sales and ensure the employment of almost 23 million people. This underscores the fact that the sales forces of America will be responsible for helping sustain and ensure our economy’s future growth, both during and after we emerge from the pandemic.

TOP EXECUTIVES – Use the Selling Power 500 to benchmark your company’s productivity per salesperson. Find out how you measure up to your competition and the average in your industry. Check which companies have decreased their sales forces and which are gearing up for expansion. Buy the full listing now.

EDUCATORS – Use the Selling Power 500 as a tool to build next year’s curriculum. Every year, Selling Power 500 companies seek to recruit more than 500,000 college graduates. There are more than a dozen colleges that offer sales curricula, and all of their graduates can look forward to solid careers in sales. Prepare your future students for a lucrative career in sales. (Note: Media research shows that the average Selling Power magazine reader has a college degree, works in sales management, and has a household income of over $174,000 per year.)