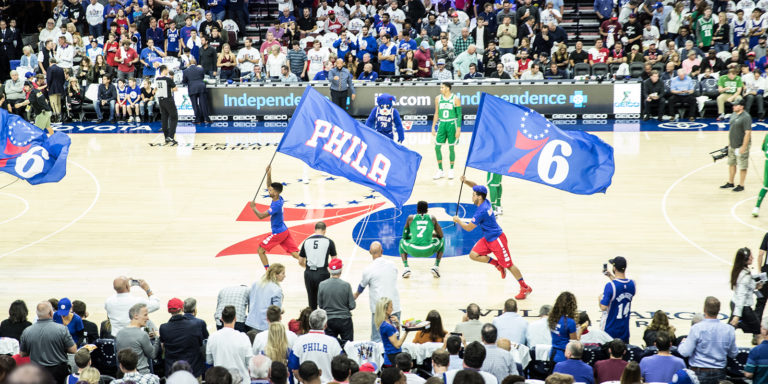 How do you win when your organization is losing? That’s a question the Philadelphia 76ers found themselves grappling with a few years ago.

On the night of December 1, 2014, the team lost its 17th straight game, putting its season start at 0-17 – nearly the worst start in NBA history. By the end of the 2014-15 season, things had barely improved. The team closed the season 18-64 in a tie for the franchise’s third-worst finish ever recorded.

What was going on?

CULTURE OF SUCCESS
Jake Reynolds and Christopher Heck were going on.

Both sales leaders joined the organization in mid-2013 – Reynolds, as senior VP, ticket sales and service; Heck as chief sales and marketing officer. Their mandate: to win at sales regardless of what was happening on the court. Sharing a sales background in professional sports, they both recognized that, to do that, they needed to create a winning sales culture untethered to team performance.

Too often, a great culture is viewed as something that is a result of success, says Reynolds. We wanted to flip that. We decided culture would be the catalyst that drives success forward. The pillars of that culture: people, learning, and fun. Heck and Reynolds believed if they hired the right people, put them in the right positions with the right training and development, and immersed them in a fun, competitive, high-energy environment, they’d be successful. Importantly, they knew they had control over these elements while they did not have control over the Sixers’ win-loss record.

The organization is in the process of cataloguing the characteristics of its most successful reps and creating a personality test to better identify these qualities in potential new hires. Even without the test, though, they have been remarkably successful at pinpointing candidates who are a good fit. The Sixers currently boast an NBA-leading employee retention rate of 82 percent, despite the organization’s incredibly high standards and large size. Philadelphia is the fifth-largest market in the country, but the Sixers’ sales force is currently the largest in professional sports with 115 full-time sellers.

These sellers typically pay for themselves within their first nine weeks on the job. By their second year, reps are expected to be selling 2.5 times the revenue they sold in their first year. To ensure they hit that target, sellers are pushed, challenged, and invested in. They have access to all the resources they need for success – and they are expected to achieve that success.

We wanted the environment to be highly competitive but also highly collaborative, says Reynolds, who has since been promoted to chief revenue officer of the Philadelphia 76ers and SVP of ticket sales and service for the Philadelphia 76ers, New Jersey Devils, and Prudential Center. People aren’t competing with each other; they are competing to be the best in the world as a group. We want to set a high bar: number one in the NBA in ticket sales on fullseason tickets. That’s where the meat of the business is.

It’s working. The team achieved that goal earlier this year and has sold out every regular season game for next year. That’s 41 games completely sold out – and with a waiting list of people trying to get season tickets. For a non-playoff team. It’s unprecedented, admits Reynolds.

WINNING WITH MILLENNIALS
In many ways, Heck and Reynolds have pulled off the unimaginable by tossing tradition and conventional wisdom off the court. Conventional wisdom says winning precedes culture; the Sixers believe culture can drive wins. Tradition says a non-winning team can support only a small sales staff; the Sixers believe a large, effective sales staff drives large sales. Conventional wisdom says millennials are tough to manage, tough to motivate, and have little organizational loyalty; the Sixers know millennials are the foundation of their sales department and the key to their sales success. A whopping 99 percent of the 115-person sales team are millennials – a fact that drives many leadership decisions.
Heck and Reynolds know their millennial employees will meet the Sixers’ high expectations if the Sixers meet the high expectations of their millennials. For instance, millennials, as a general rule, crave recognition, reward, and feedback. The Sixers’ sales management team knows this and therefore presents more than 15 employee recognition awards every week. These are no small cake-anda-pat-on-the-back events. They are large ceremonies, conducted like press conferences, with a backdrop and podium, a public pronouncement of the employee’s qualities and achievements that led to the award, photo ops with jerseys, the opportunity for the employee to give a speech, and (occasionally) a fog machine. Many times, parents of the employees are invited to attend the ceremonies – a meaningful touch for this generation.

The events are designed to mimic the excitement of NBA Draft Day. Giving employees a platform where they are recognized in front of their peers is huge, says Reynolds. We hear from them that, of all the moments they are most proud of, these promotion ceremonies rank near the top.

The ceremonies also provide a counterbalance to the intensity of a tough workday. Heck and Reynolds know they can’t get the best out of their millennial employees if the employees aren’t having a good time, so they’ve become experts at blending hard work with fun. Sellers work long days in the office and late nights in the arena on weekends – but, in addition to high-profile recognition celebrations, they enjoy perks like continually-refreshed and fully-stocked kitchens, team-building paintball games, and weekly employees-only basketball games in which they are joined by Harris Blitzer Sports & Entertainment CEO Scott O’Neil.

This kind of accessibility to the top is another way in which the Sixers discard conventional wisdom and do things their own way to meet the needs of their millennial reps. Rather than buffering themselves with layers of rank and red tape, O’Neil and his executive leadership team encourage employees to share personal insights with them during company-orchestrated, access-focused events, including an executive speaker series, executive lunch-andlearn programs, Breakfast with the CEO, and more. Half of all employees attend these events consistently.

Heck is just as accessible. Despite being the president of the organization, he can often be found walking around the sales department having conversations with reps. His millennial staff needs this kind of interaction while Heck relies on these conversations to learn about employees and stay in touch with what’s going on at the front lines of sales.

MAKING MOMENTS
Still, no matter how effective the sales team is and how super-charged the selling environment is, you can’t escape the fundamental problem that the Sixers are selling losses. People are buying tickets; games are selling out; but the Sixers aren’t winning any more games. How is the sales department bringing people back again and again – transforming one-time attendees into season ticket holders – when the scoreboard is often a disappointment?

The answer lies in a lesson learned from the Sixers’ training partnerships with The Disney Institute and the Ritz-Carlton: When people come to our arena, they aren’t buying a ticket; they are buying an experience, says Heck, who calls himself a true student of the best practice game. Again, it all comes back to: what does the sales team have control over? They don’t have control over the outcome of the game, but they do have the ability to make the experience of that game memorable.

When you walk into our arena, you see smiles; you see pride in our staff. Our people are dressed up – and that is infectious with our fans, says Heck. You also see staff making memorable moments for those attending the game, he adds. The leadership team launched an initiative called 76 Seconds aimed at encouraging staff to take 76 seconds out of their game-night responsibilities to create a special experience for a fan. This might include surprising someone with free popcorn or a soda. It could be presenting a certificate for a child’s first game. It might be bringing a family down to the court to have their picture taken on the floor with their own cell phones before the game. It could be inviting a group of children onto the court to high-five players when they first come out of the locker room. The sales team is armed with ideas and empowered to make them happen. Our staff wear Sixers pins to every game and, more times than not, you’ll see them walking out of the arena at night and their pin is gone. They’ve passed it on to someone during the night, says Heck.

All this makes for a positive, memorable night no matter how the score turns out. Sure, a loss will always be disappointing for fans. But it will be a short-lived disappointment. In the long run, management believes they will remember the positive experience they had at the game. Ticket sales are one barometer that the effort is working. Another sign the organization is on track: In 2016, the Sixers achieved a number two ranking in NBA season ticket member customer satisfaction surveys.

Today, Heck and Reynolds are routinely invited to speak at conferences and events as organizations both inside and outside sports are taking notice of what they have achieved in Philadelphia. While this recognition has been fairly recent, the path to achievement has been long and deliberate. Heck calls the Sixers’ sales and marketing wins a four-year overnight success. Looking back, he says their aim was to restart a storied franchise. We had this incredible franchise that was a bit forgotten and we saw an opportunity to take that tradition and add new influences and new tools to create something powerful.